How Did Yiddish Words Make Their Way into German?

A centuries-old tale of complicated, ambivalent, and, sometimes, covertly intimate relationships between a largely anti-Semitic Christian society and its Jewish minority.

Mysteriously, a newly published book was delivered to me by courier mail the other day with no indication of who sent it. Written by the German linguist Christoph Gutknecht, it’s entitled Gauner, Grosskotz, Kesse Lola: Deutsch-Jiddische Wortgeschichten (“Gauner, Grosskotz, Kesse Lola: German-Yiddish Word Histories”), and in it are over 60 entertaining mini-essays by the author about West European Yiddish-derived words in the German language and the complex stories of what happened to them there. (West European Yiddish, substantially different from the more familiar East European dialects that developed from it, was once spoken by Jews in Germany, Austria, Switzerland, and elsewhere.)

The Jewish Connection to Jerusalem


By Rabbi Ed Snitkoff for MyJewishLearning.com

With the sound of shattering glass at the conclusion of the wedding ceremony, generations of Jews were reminded that Jerusalem was destroyed and the Jewish people were in exile. With this ritual the vow recorded in book of Psalms was actualized: “If I forget thee Oh Jerusalem, let my right hand wither, let my tongue stick to my palate if I do not remember you, if I do not set Jerusalem above my greatest joy” (Psalm 137).

While we are overjoyed for the couple, at the same time, we remember that this small shattering glass is filled with sad memories mixed with hopeful dreams.

Yehuda Amichai, a well-known Israeli poet, wrote about remembering Jerusalem in a collection called “Songs of Zion the Beautiful“:

Love Israel? We do too. Follow our Israel board on our

The Mendacious Maps of Palestinian “Loss”

Shany Mor for The Tower

Anti-Israel activists often use doctored maps to show Israel’s supposed malfeasance over the past century. Such claims are made by people who, in the best case, have no knowledge of the facts, and in the worst case, have no moral compass.

You can’t walk very far on an American or European university campus these days without encountering some version of the “Palestinian Land Loss” maps. This series of four—occasionally five—maps purports to show how rapacious Zionists have steadily encroached upon Palestinian land. Postcards of it can be purchased for distribution, and it has featured in paid advertisements on the sides of buses in Vancouver as well as train stations in New York. Anti-Israel bloggers Andrew Sullivan and Juan Cole have both posted versions of it, and it occasionally creeps into supposedly reputable media sources, like Al Jazeera English.

The Hebrew Revival Was No Miracle


It took tremendous toil to produce the cultural rebirth of the Hebrew language. Let us give thanks to the toilers—and to their master translator.

For whom does Hillel Halkin toil?

After reading his magnificent essay in Mosaic on the life and work of Yehudah Leib Gordon, the preeminent Hebrew poet of the 19th-century Jewish enlightenment, I had the same thought I’ve had over and over again since I was a teenager: unending gratitude that someone out there has done the world a favor by opening up the genizah of Hebrew literature and curating its treasures. As usual, that someone is Hillel Halkin.

By Lisa Klug for The Times of Israel

Filmmaker Philippe Mora talks about his three visits to his mother’s ‘hell,’ which he documented with help from his longtime musician friend who co-produced

Shortly before World War II came to a close in the spring of 1945, Eric Clapton was born. More than 71 years later, the rock legend has composed a score that revisits that tragic time in history.

Clapton, friends with Mora since 1967, also co-produced the film, entitled “Three Days in Auschwitz,” which revisits the fate of Mora’s family during the Holocaust. The film debuted in the UK last week. It will also appear at the New Horizons International Film Festival in Wroclaw, Poland on July 24.

Ancient Jerusalem: The Village, the Town, the City


How Many Jews Lived in Ancient Jerusalem?

It’s made such an enormous impact on Western civilization that it’s hard to fathom how small its population really was—small compared even to the centers of contemporaneous empires to the east and to the west. Of course, I’m talking about Jerusalem. 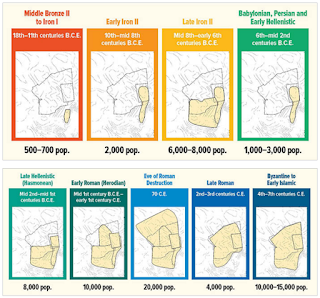 A new study of Jerusalem’s population in various periods has recently been published by one of Israel’s leading Jerusalem archaeologists, Hillel Geva of Hebrew University of Jerusalem, and the Israel Exploration Society. Geva bases his estimates on “archaeological findings, rather than vague textual sources.” The result is what he calls a “minimalist view.”1 But whether you accept Geva’s population estimates or those of various other scholars he cites, to the modern observer the ancient city of Jerusalem can only be described as “tiny”—with population estimates at thousands and tens of thousands during many periods of the city’s history. (In comparison, Rome in the century before Jesus lived is estimated to have had a population of 400,000 tax-paying males—so the entire population must have been about a million.)

DAVID KEYS for The Jewish Voice

Israeli-born geneticist believes the Turkish villages of Iskenaz, Eskenaz and Ashanaz were part of the original homeland for Ashkenazic Jews 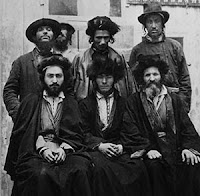 New research suggests that the majority of the world’s modern Jewish population is descended mainly from people from ancient Turkey, rather than predominantly from elsewhere in the Middle East.

The new research suggests that most of the Jewish population of northern and eastern Europe – normally known as Ashkenazic Jews – are the descendants of Greeks, Iranians and others who colonized what is now northern Turkey more than 2000 years ago and were then converted to Judaism, probably in the first few centuries AD by Jews from Persia. At that stage, the Persian Empire was home to the world’s largest Jewish communities.